At the far edge of what the human eye can perceive, far-red radiation lies along the spectrum from 700 to 800 nanometers. This is outside of photosynthetically active radiation (PAR), the range of blue, green, and red light (400 to 700 nm) that plants use for photosynthesis. But it’s important to understand that light outside of PAR, including far-red, also contributes significantly to plant development. Far-red light treatments are typically associated with plant extension and expansion growth, including stem elongation and leaf expansion, as well as biomass accumulation and flowering.

While humans can dimly see red light, far-red light is almost beyond the range of light quality we can perceive. Plants, on the other hand, are extremely sensitive to both and interpret very specific signals from red and far-red light on how to grow.

Though leaves absorb the most red radiation, they transmit or reflect the most far-red. Leaves undercover, such as under a dense tomato canopy, would therefore receive more reflected far-red than they would absorb red. Plants, therefore, associate far-red light with shadows and light filtering. This triggers a shade response, where plants typically stretch or expand to capture more light. The effect far-red light has on plants changes depending on their growth stage and when it is applied. Far-red can be provided to plants in various light treatments, such as constant far-red within the light spectrum, as an end of day (EOD) far-red treatment, or as an end of production (EOP) far-red treatment.

When it comes to providing light treatments to plants, intelligent LED lighting and controls are a true game-changer versus static HPS. By providing your crops with the right light, at the right time, and in the right quantity and quality, intelligent LEDs and integrated controls like helioCORE™ can enable you to achieve your growth goals at every stage. For example, you can meet early goals like building strong stems in tomato seedlings. You can also meet specific goals throughout, like growing bigger lettuces. And finally, you can meet the end of production goals, such as preparing basil for transport. The following examples illustrate how different growth goals can be achieved with far-red light treatments.

One of our customers was able to eliminate chill damage in potted basil when transporting to retail, by using a far-red light treatment at end of production. Vitacress, a UK-based company, teamed up with Royal Holloway University to change the way their basil plants behaved in the cold. They used Heliospectra’s ELIXIA lighting with the capability to change spectrum, and they set programmable lighting strategies throughout the day. Chris Moncrieff, Production Director at Vitacress, commented, “What was really impressive was that we found that by changing the ratio of far-red and red, Vitacress could get the basil plants to actually be chill tolerant. By shining this different ratio of LED lights on basil for a period of time, we significantly extended the shelf life of our potted plants in the retail stores.” Ultimately, Vitacress was able to deliver a longer-lasting and higher quality product with a far-red treatment at end of production.

One of our cannabis growers significantly shortened the time to market by decreasing flowering time by 10 to 14 days across many strains. This Washington State commercial grower runs a 12/12 light cycle during flowering. Towards the end of their 12-hour light cycle their blue, white, and red radiation switches off, leaving far-red at full power to finish the cycle. Using flexible ELIXIA LEDs, they boosted flowering at EOP with far-red and saw increased crop throughput while achieving better than average yields.

Using far-red is not only helpful at end of production. Heliospectra’s plant and light experts conducted a study on Black-Seeded Simpson Lettuce throughout growth to see the effects of a far-red enriched spectrum on lettuce in a sole-source light environment. Using ELIXIA lighting the plants were grown under four different spectra, all with the same light intensity (200 mol/m2/s) and spectral composition within PAR (red, blue, and white wavelengths). Three of the four spectra had far-red added at low, mid, and high intensities. After 22 days there was a clear difference in the height and size of the heads at harvest, showing increased diameter and weight in direct proportion to the increase in far-red used. 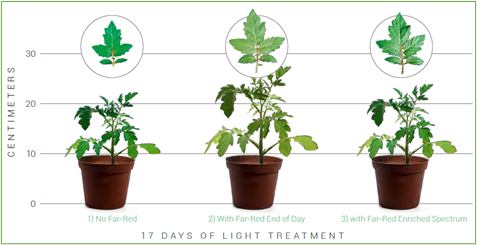 Heliospectra’s experts investigated the effects of far-red light treatments on tomato seedlings, in order to control stem height and thickness. The seedlings were grown under ELIXIA LEDs, and after 17 days it was clear that the plants grown with far-red were taller, had larger leaves, and thicker stems compared to the seedlings grown without far-red. Interestingly, the seedlings treated with EOD far-red produced almost 15% taller plants with 3.8% thicker stems than plants grown without far-red. Additionally, by adding far-red only at the end of the day, rather than throughout, energy consumption was reduced.

Different far-red lighting strategies can influence crop growth at different stages of the production cycle. Whether you want to grow taller and thicker stems, produce larger leaves and heavier biomass, or decrease flowering time and get plants to market faster, you can schedule your light treatments with helioCORE™ intelligent lighting controls. This highly intuitive platform can also offer several spectral control options based on the lighting solution being used, such as our 4-channel ELIXIA. Want to achieve your crop goals at every growth stage? Let’s chat.

Be the first to know about LED lighting technology and the latest in horticulture. Get monthly updates with our most recent blogs delivered right to your inbox.